So goes the Robert Burns song and although a big part of my heart is in the Highlands, ( I was born in Dingwall and spent my childhood near Inverness before heading south to study in 1979) –  it is not deer I chase but PBs at the Inverness Half marathon race!

The Inverness Half marathon, held as it is in early March, is one of the first half marathon races in the season (in Scotland).  It is a good way to test your legs over a longer distance after winter training and suits many people who are training for a spring marathon.

Until this year, I was not in that marathon training category but had chosen to take part in this race partly because of family connections, but also because having first completed it in 2011 in snowy, cold, conditions and lived to tell the tale –  when I compared it with my experience of some other half marathons, I concluded that Inverness is a race that for me offers close to the perfect combination I am looking for in an event. 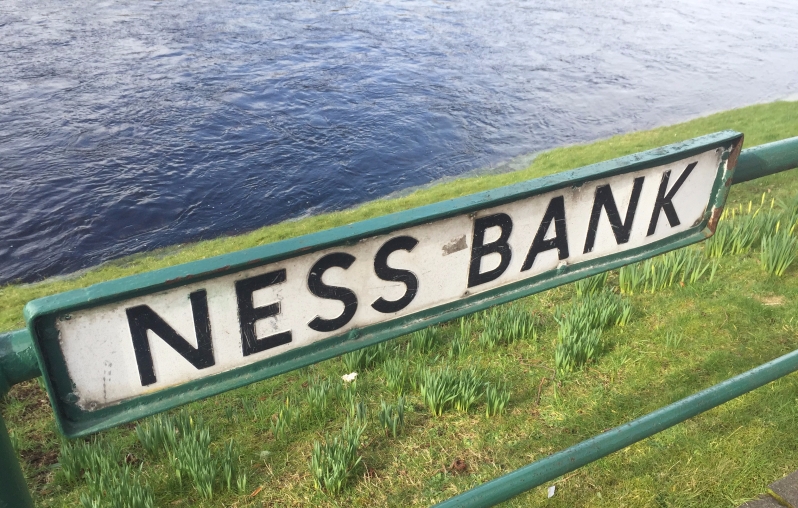 The course is interesting but not too taxing, with lots of places for spectators to support you, it is big enough to feel like a special event but is not so big to be impersonal or overwhelmed by the razzamatazz. And it is very well organised and friendly.

As a bonus, I get great race support from my brother and sister-in-law and my niece, who between them provide excellent cheerleading, patiently listen to my pre-race anxieties, provide fab post race support and generally make it a most enjoyable occasion. 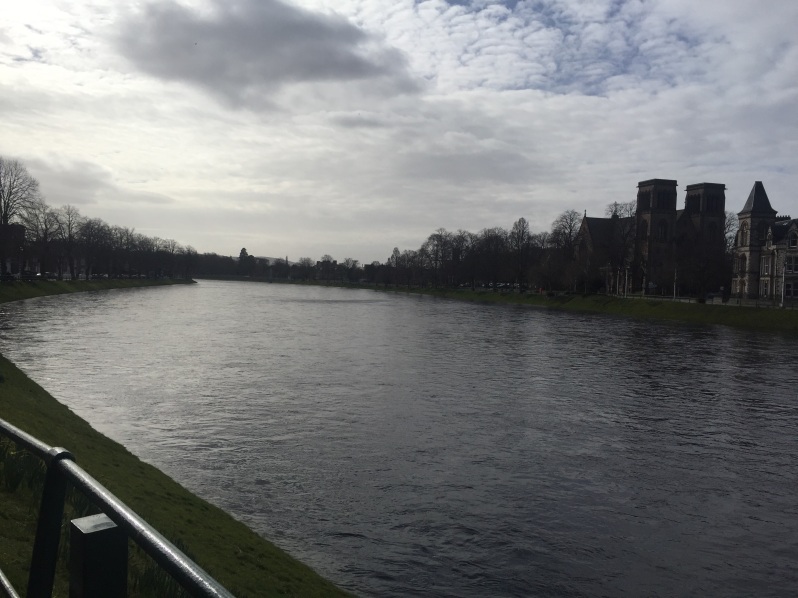 Even though I have run other races with arguably better PB potential ( Edinburgh and Aviemore ) my half marathon PB was and still is from Inverness. Not completely sure why this should be – and maybe once I have the marathon behind me, I might revisit some other half marathon races to see if I can improve my time.

Each year before Inverness, I will have followed a self-designed if somewhat fluid ‘training’ plan – mostly around adding in a longer run at the weekends to my regular run schedule of around av 12 – 15 miles per week.  I also do this run streak challenge every December and maybe running 3 miles every day in December gives me a base of fitness.

I know from reading my large collection of running books, that my training for Inverness could not really be described as following a plan, and even more so now that I am following a proper training plan for the Stirling marathon. My lead up to Inverness has never included any specific sessions of speed work or hills or running at race pace, although last year I had started to do a weekly session with a  PT to help my core strength and build on my endurance.

But although I was not taking run training as seriously as I should have – between 2015 and 2016, I had been following a new eating plan with fitnaturally and because of this, I had lost quite a bit of weight. Being over 14 lbs lighter meant I found running more enjoyable and I think largely due to being lighter and despite my casual approach to training – I was absolutely delighted to knock almost 9 minutes off my time in 2016.

2017 arrived and I started my marathon training plan – sharing with Sally that I would quite like to do sub 2 hrs in a half. This was built into my plan, and  then I discovered that I really did not enjoy speed work !   As the Inverness race drew closer  I started to get the jitters about achieving a time of under 2 hours, when I knew that it meant me averaging 9-minute miles for the full 13.1 mile distance. 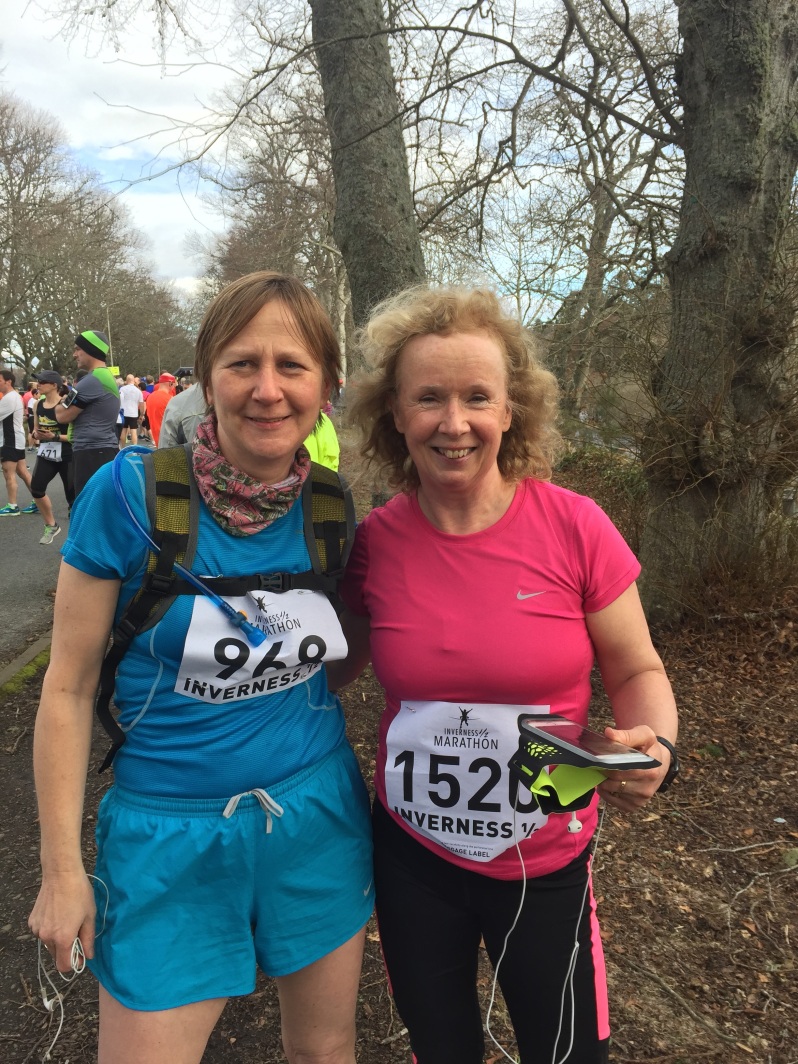 I started to back pedal and keep quiet about my sub 2 goal, saying that the marathon was my 2017 goal and anything else a bonus –  of course, a new PB would be nice – but hey –  I only had a knock a few seconds off my 2016 time to do that 😉

I know that one reason I felt the pressure was because this was the first time I was approaching this race or any race against a background of having properly trained. Excuses for failure were thin on the ground, and as is the contrary way I am around pressure and expectation – I was dreading the race more than I had on previous occasions.  I am slowly understanding that in running, putting in the training hours is about giving you the foundation for success, and I knew this would be the first real test.

Fortunately, this story has a happy ending.

Having already put in a decent amount of training since January, come race weekend I did my best to avoid sabotaging my chances, first by resisting the temptation for a night before glass of wine or two, then on race day following Sally’s nutritional advice to the letter, and I even took heed of her race plan advice which went something like this:

Overall I did feel more in control during the race – and had an inner strength that I will put down largely to the mileage and other training I have been doing as part of my marathon build up. But I did not find it easy, and particularly as I got closer to the finish and knew that my sub 2 hour time was within my grasp.

With 3 miles to go and with a big part of me wanting to just accept a PB and abandon my ‘not so secret’ real sub 2hr goal for another day – I had a conversation with myself and it turns out that even I have a bit of competitive spirit. So with less than 2 miles to finish I gave it my best shot – and helped by a final and extremely loud cheer at around 12.5 miles from my niece Laura – I got there in a time of 1 hrs 59 mins 18 secs. 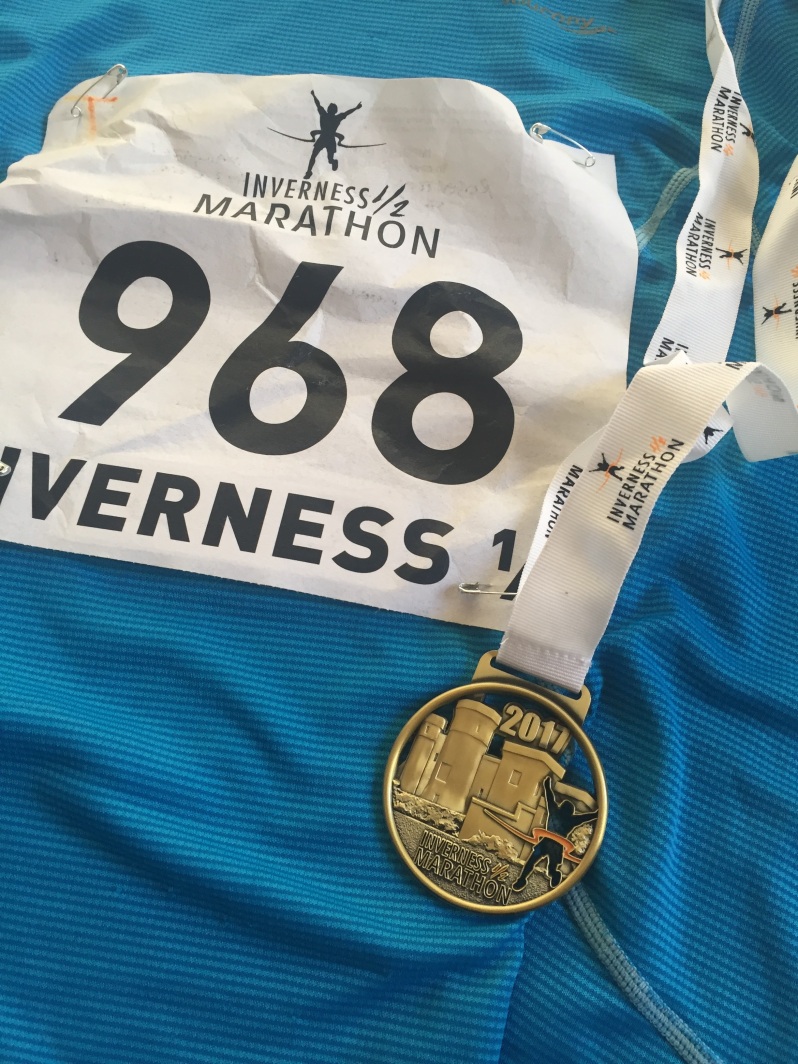 I am taking  part in Stirling Scottish Marathon on May 21st and it will be my first marathon. To get me ready for this challenge I am following a  marathon training plan provide by Sally at fitnaturally.

fitnaturally offers a range of healthy eating plans that can help with weight loss and sports nutrition. They provide bespoke training and nutrition for people taking part in sport at any level. I have been following fitnaturally plans for over a year and I have become leaner and fitter, losing more than 20lbs in weight and a reduction in body fat% in a gradual and sustainable way and by eating normal and enjoyable food ! 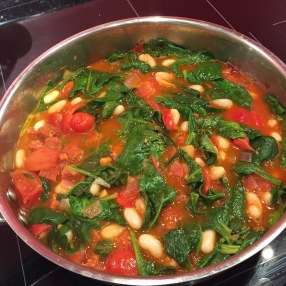 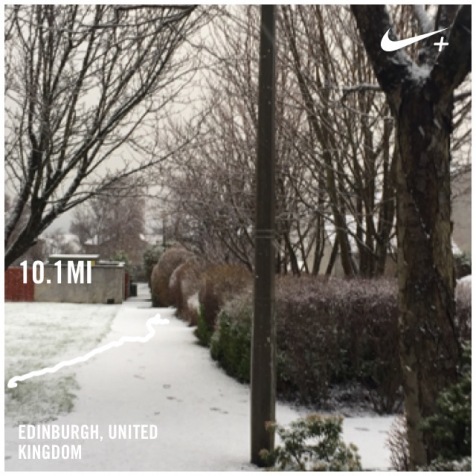 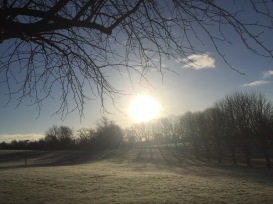 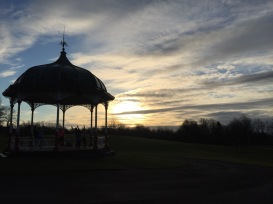 Some people read newspapers back to front and I think my approach to training is perhaps similarly contrary. Running is something I do for my overall wellbeing – exercise I have come to  later in life that combines many things I find uplifting – being outdoors, watching the weather, observing nature and spending time with friends.

I acknowledge now that I am mildly addicted to running, getting a bit twitchy and irritable if I have not managed to get out for a run, so regular social runs are a comforting constant to keep the twitching at bay. And as my running confidence has increased it’s easier to find ways to slot running around the rest of my life, with being a run tourist one of my favourite ways to discover new places.

So if running is mostly about looking after myself, and offsetting life’s stresses, I wonder why I keep entering races?

I don’t really know the answer to that, and writing this a day before a race is maybe not the best time to come up with a considered analysis!  For some people running is the perfect outlet for their competitive spirit, but I don’t see me fitting in that category – my desire to win is underdeveloped – although I do like to set myself personal goals and challenges.

While I long to be more ‘zen’ about running and its place in a quest for self improvement, I do enjoy keeping a tally of distance covered, pace and effort. Running has unlocked my inner geek around lists and records and the joy of seeing the miles increase on my Nike+ app is something I would struggle to give up.

And maybe a race creates a framework or purpose for this measurement – so while I am not desperate to be first – taking part in races does let me see how I compare to fellow runners and if I have made any progress since the last test.

So back to today and training plans or otherwise. I have never yet properly stuck to a race plan as for whatever reason I am not really very  good sticking to a set of prescribed rules to achieve a desired outcome.  While I don’t just rock up unprepared, training for races has mostly involved increasing mileage and incorporating this into the runs I have planned with Alison. We are good training buddies. This means I usually get to this point before a race feeling OK about my ability to complete the course but also wondering what might have been achieved if I had made the effort to follow a proper plan rather than just play it by ear.

This year while my run training has not followed a plan as such – I have been following a different plan that has had a positive impact on my running. Having acknowledged that I am not the best at following rules and plans,  since  July 2015 I have been following an eating plan, and by doing this have lost quite a bit of weight. ( so am around 16 lbs lighter than I was this time last year).

The weight loss and results I have seen by sticking to some simple rules around eating from fitnaturally ( good natural food, not too much) has encouraged me to incorporate some different types of fitness training – and  I have been doing some strength and speed work with a colleague from work who is a personal trainer.

The weight loss is making me enjoy my running even more than before and I am feeling in good shape and while I have not yet followed a race training  plan to the letter – it definitely feels as if I have put in more effort than before, or addressed some weaknesses.

So why despite all this do I have the usual if not more pre race anxiety this time around ?

I can only put it down to my fear of failure , and back again to why I have mixed feelings about racing. My previous haphazard attempts at training have been replaced by a bit more effort and instead of it giving me confidence it has made me feel I have eliminated my excuses for failure !

Today I am trying to set my expectations and calm my jitters against a different background of possible success – how strange for me !

But fortunately life experience has me prepared and so I am  tapping into my collection of  the ‘whats the worst that can happen scenarios’ and am sure I will manage to make a kind of peace with myself before the start line.

See you at the other side 🙂 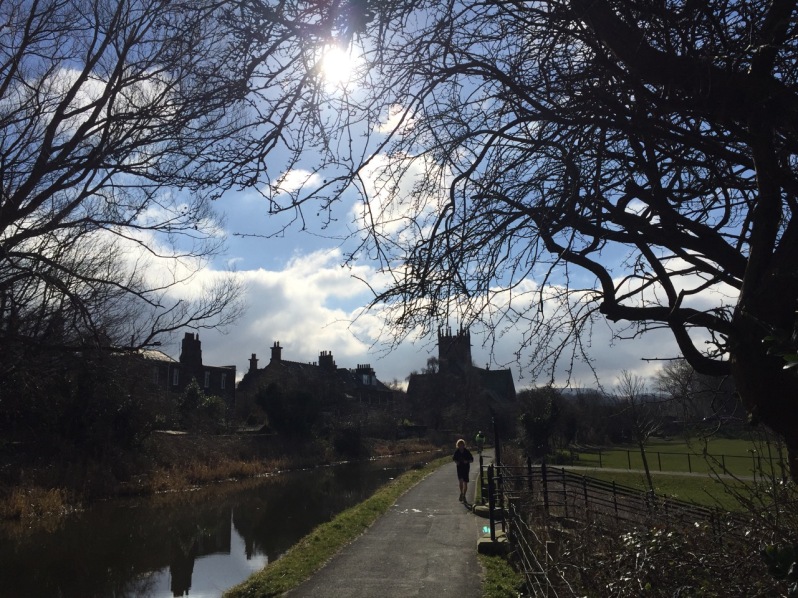 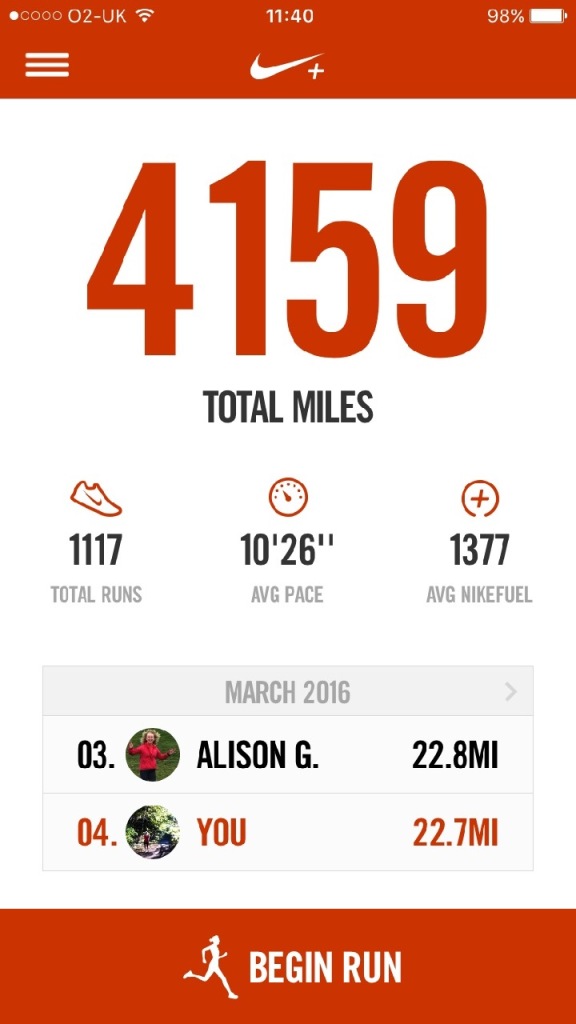 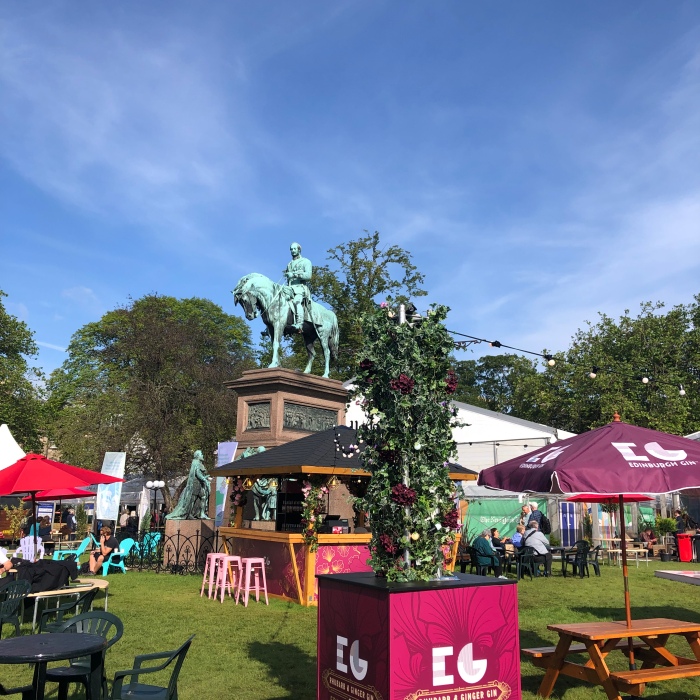